Size and Weight: The adult raccoon is a medium-sized mammal and the largest of the Procyonidae family.  It averages 24 to 38 inches in length and can weigh between 14 to 23 lbs., or more, depending upon habitat and available food. The male raccoon, or boar, is slightly larger than the female, also referred to as sow. The young are called kits.

Physical Features: The mask of black fur that covers its eyes is its most characteristic and familiar feature. One hypothesis for the dark fur is that it may help reduce glare and enhance the nocturnal animal’s night vision. The species has grayish brown fur, almost 90% of which is dense underfur to insulate the animal against the cold. Because its hind legs are longer than the front legs, a raccoon often appears hunched when they walk or run. The five toes on a raccoon’s front paws are extremely dexterous, functioning essentially as five little fingers which allow it to grasp and manipulate food it finds in the wild as well as a variety of other objects, including doorknobs, jars, and latches. A raccoon’s most heightened sense is its sense of touch. It has very sensitive front paws and this sensitivity increases underwater. When able, a raccoon will examine objects in water.

Life span: In the wild, a raccoon has a life expectancy of about 2 to 3 years, but in captivity a raccoon can live up to 20 years.

Diet: The raccoon is an omnivorous and opportunistic eater, with its diet determined heavily by its environment. Common foods include fruits, plants, nuts, berries, insects, rodents, frogs, eggs, and crayfish. In urban environments, the animal often sifts through garbage for food. The majority of its diet consists of invertebrates and plant foods.

Habitat: Originally raccoons lived in the tropics where they could be found foraging along riverbanks. Over time they moved north up the continent, successfully adapting to new territories and expanding their diet. Traditionally, they live in tree cavities or burrows emerging at dusk to hunt frogs and crustaceans while keeping an eye out for predators such as coyotes and foxes. Barns have aided their northern migration, offering refuge from cold northern winters, and now, raccoons have been found as far north as Alaska. Raccoon populations do very well in urban areas, primarily due to hunting and trapping restrictions, a general lack of predators, and an abundance of available human food. The size of a raccoon’s home range varies depending on habitat and food supply. In urban areas, its home range generally spans about one mile. 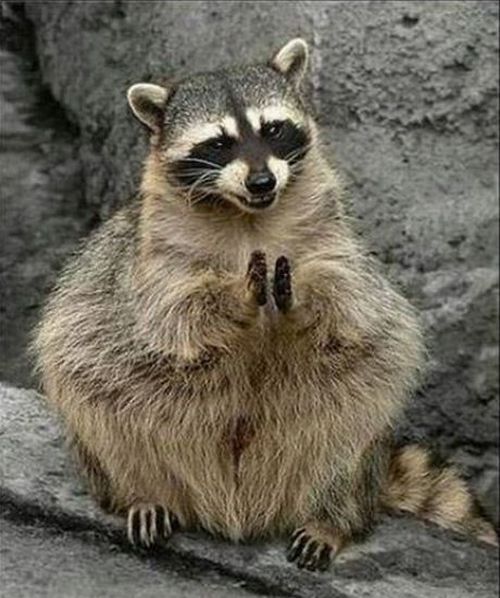 Breeding and Social Structure: The animal is nocturnal, mostly foraging and feeding at night. Mating season for raccoons falls generally anytime between January and June.  Most females begin reproducing around the age of one. The female has a 65-day gestation period and gives birth to two to five kits, usually in the spring. A mother usually separates from other raccoons to raise her young alone. The male does not participate in the raising of the kits. The kits stay in the den with their mother until they are between 8-10 weeks old, and will stay with their mother until they reach 13-14 months of age.