Raccoons and squirrels have become a major problem in the last few years in urban centres for a number of reasons, but mainly due to the massive building boom and warmer winters we have been experiencing. Their ability to find food and shelter in an urban neighbourhood has made them one of the most successful urban wildlife species. Although populations can vary greatly depending on the availability of food sources and den sites, most cities average between 15 and 25 raccoons per square kilometre. As soon as they come indoors, they become a major concern because raccoons and squirrels have the ability to do a lot of structural damage in a home.

Raccoon populations in major urban centres, as well as in towns and suburbs, have greatly increased over the last 10 years. As a nocturnal animal, raccoons do most of their gathering at night and will eat just about anything they find. Raccoons are very smart and know exactly where to find unprotected garbage cans, gardens and pet food. It should come as no surprise that well-fed raccoons live longer and will, therefore, have larger litters, with better survival rates. When they nest indoors, there are no natural predators or vehicle traffic to endanger them, so disease and infection become the greatest threat to an urban raccoon’s life.

Typically, raccoons won’t actually construct their own den sites, creating their home inside natural tree and rock hollows. However, in urban areas, raccoons tend to be attracted to settling inside attics, chimneys, and sheds, due to their excellent shelter and protection properties. Raccoons are comfortable living alongside man and actually prefer nesting inside man-made structures such as homes, sheds, garages, etc.

This is also due to the fact that the warmth and shelter provided by an attic make it the ideal place to mate, raise families, and obviously keep out of the frigid cold. Something most people may not realize is that often raccoons will actually build multiple homes within a neighbourhood for added security.

If you have raccoons in your building, our wildlife control experts can help you get them out, and keep them out. Our wildlife animal control services consist of humanely trapping the animals live and removing them at least 5 miles to a wildlife area. In addition, we always do our best to trap and release the animal families together. 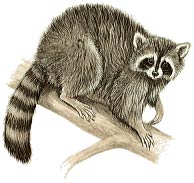