About.
In many regions, carpenter ants (Camponotus) are the most important wood-infesting insects in the urban environment. They are called carpenter ants because nest galleries have a smooth surface, as if sanded by a carpenter.

Carpenter ants DO NOT EAT WOOD! They are outdoor scavengers and usually feed on insects and aphid honeydew. However, workers will forage indoors and are often found in kitchens searching for food.

The ants are a threat to structural timbre because of their ability to excavate large nests and the potential of continuously infested wood being weakened.

Identification & Distribution.
Carpenter ants are large; they may all be black, black and red, or reddish brown. The head and body of major workers is much larger than those of the small, minor workers.

Note: The wings of both the male and female are of different sizes, distinguishing them from adult termites, in which the wings are the same size and length.

Colony Activity.
Colonies usually have 8,000 to 10,000 individuals and are divided into small, satellite nests and a main or parent nest. The parent nest is usually in a humid environment and contains the queen, developing eggs, and small larvae. In the satellites, there are workers, larvae, pupae, and sometimes winged reproductive. The number of satellite nests is variable and depends on environmental conditions and colony age. 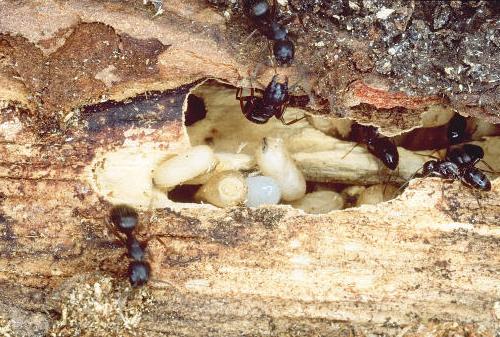 Food.
Natural food includes honeydew, plant sap, and live and dead insects. Indoors, the ants forage for sweets and high-protein foods. During spring and early summer, the workers prefer proteins, which are fed to developing larvae. In late summer and fall, workers prefer carbohydrates, which are used as an energy source. 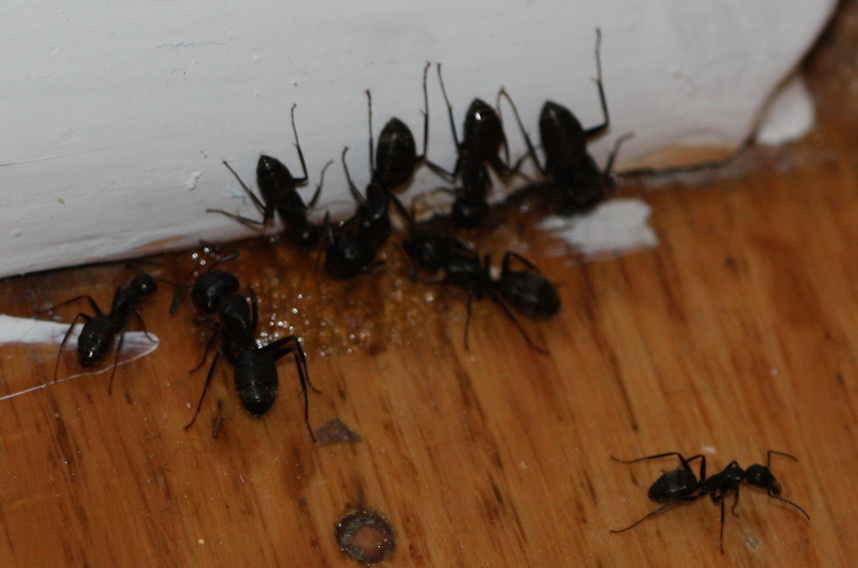 The majority of foraging is done at night, and most species rely on chemical trails for orientation to a food source. Indoors, they travel on edges formed along walls and cabinets, and they orient to pathways formed by electrical wires and water pipes. On the outside of structures, they often travel along the branches of trees that contact the roof or siding.

Infestation Sites.
Nests are constructed in live or dead trees, in rotting logs or stumps, or in sound or moisture-damaged structural wood. Some species nest in soil, under rock, or in logs, such are firewood.

Workers excavate the wood with their large toothed mandibles. As workers age, the teeth on their mandibles wear down. Galleries are irregular in shape.

Indoor infestations are often satellite nests, which are connected to a main colony located outdoors. Satellite nests may remain unnoticed because workers forage outdoors and in the evening. Nest locations include: in wall voids, roof supporters, sub-flooring, ceiling joists, and still plates or foundation piers.