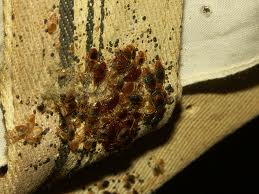 Interestingly;  about two years ago at a bedbug symposium, an official from MOE (which regulates pesticides for the Government in Ontario) got so flustered when  attendees kept mentioning  bringing back certain pesticides to help battle the major bedbug problem all cities are facing,  he threatened  to leave the podium if that line of questions did not stop.

I’m not sure why he was so flustered, but from my 30 plus years  in the pest control business, I do know that if the government unregulated just a few pesticides such as Dursban or Diazanon we would definitely not have the same problems we now have, and frustrated landlords would not be out of pocket for the thousands of dollars they are spending to fight bedbugs.

It’s not that we don’t have good products now, but rather the shelf life or time the chemical stays effective is greatly reduced. This in turn means bedbugs and even cockroaches can stay hidden in cracks and crevices until the chemical evaporates and that unfortunately can be in as little as 24 hours with certain insecticides. At Action Pest control, our technicians have been using three different insecticides as well as different treatment methods and equipment to battle these problems.  However if the Ontario Government would actually look and listen to what works; and ensure that they are used safely, this is the way to go.

Instead of making decisions to appease to a certain demographic of voters, perhaps we can begin to get this problem finally under control and not  let itcontinue to be a runaway train on a collision course.